A Freedom of Information Act request submitted to the CIA on John L. "Jack" Acuff, Jr., the man instated as president of NICAP in 1970, received a September 9 response in which the spy network would neither confirm nor deny the existence of records that would reveal an unacknowledged or classified association with Acuff. Known as a "Glomar response," the Agency explained that the admission of the existence or nonexistence of such records is a fact that is exempt under the FOIA.

The Agency did, however, provide copies of two previously released documents that reference Acuff. The first is an intriguing, two-page, unattributed profile of NICAP as cited and explored in Wayward Sons. The second is a 24-page Robert J. Durant essay, Will the Real Scott Jones Please Stand Up?. The 1990s Durant work, widely known among researchers familiar with the latter 20th century saucers and spooks scene, apparently found its way into possession of the CIA for what may be a variety of possible reasons and came to be archived on its website.

Jack Acuff took charge of the National Investigations Committee on Aerial Phenomena in the wake of the removal of Donald Keyhoe as director. Staffer Stuart Nixon was given Keyhoe's former position in what became known as the Acuff-Nixon era of the UFO organization. Speculation and accusations of hidden intelligence community agendas involving NICAP echoed throughout the UFO subculture and continue to be popularly accepted today among those familiar with the circumstances.

The two-page document carries the heading, "National Investigations Committee on Aerial Phenomena (NICAP)," and appears to possibly be a draft of a memo or report. The name of an author is not included and the specific purpose of the document is not clear, although it is apparent that NICAP structure and operating methods were the focus of the work. It places Nixon as director and Acuff on the Editorial Review Board, suggesting the date of the piece was the early 1970s. The two pages were apparently originally approved for release by the CIA in 2010.

The document goes on to break down the education and scientific backgrounds of select NICAP volunteers. "All investigators carry credentials identifying them as investigators for NICAP," the author informs the unknown intended audience. 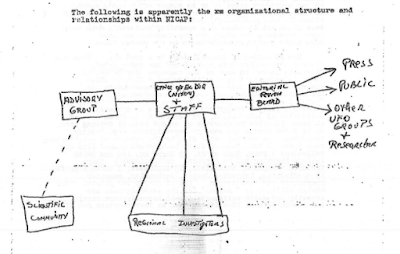 Will the Real Scott Jones Please Stand Up? takes readers through the shenanigans and misadventures of intelligence professional Cecil B. "Scott" Jones and a surrounding cast of dubious characters. Many of them have been explored on this blog, including Jones himself, who I interviewed by email in 2012.

Acuff makes an appearance in the essay when author Durant quotes the work of Fawcett and Greenwood (Clear Intent). They explained how prior to serving as president of NICAP, Acuff "was the head of the Society of Photographic Scientists and Engineers (SPSE), a frequent target of Russian spying attempts and a group that had many members involved in Defense Department intelligence units, including the CIA."

Acuff was indeed but one NICAP officer of many with significant and direct ties to intelligence agencies. Stuart Nixon left NICAP in 1974, which was the same year Sen. Barry Goldwater joined the Board of Directors. Goldwater went on to chair both the Senate Armed Services Committee and Senate Intelligence Committee.

In 1978, Acuff now-infamously sold the NICAP mailing list to a Toronto-based Nazi group. Twice. The purchaser, Ernst Zundel, aka Christoff Freidrich, was reportedly none too pleased because the list included 8,000 names of people who were physically dead (see pp1-3).

The office of Goldwater was likewise not thrilled with the turn of events, at least due to the potential publicity problems, but relations between Acuff and the Senator apparently did not entirely go south. Although Acuff was replaced at president by Harry Cooper in 1978, he did not depart NICAP for good until 1982. This happened after he secured a four-digit cash settlement from the org for what at least one member reportedly described as holding its files ransom (see p14).

In a letter dated January 29, 1982 and shown below, Acuff notified Goldwater he was leaving the Board (see p21). Acuff thanked the Senator for the help he and his staff gave him.