Earlier this year I submitted a FOIA request to the FBI for all records cross-referencing or pertaining to Ira Samuel Einhorn. The late Einhorn, dubbed the "Unicorn Killer," was convicted of the murder of his former girlfriend Holly Maddux. It is a tragic and somewhat complex saga that winds through the environmental activist community and an international trail of evading authorities.

Maddux disappeared in 1977 during a trip to gather her belongings from an apartment she and Einhorn previously shared in Philadelphia. A year and a half later her remains were found in a trunk in his closet. Einhorn fled to Europe and was assisted by supporters who he convinced of his innocence. He was not arrested until 1997 in France, and even then the extradition process proved complicated.

Einhorn was eventually convicted in 2002, but not before taking the witness stand in his own defense and claiming the CIA killed Maddux. He asserted he was set up because he knew too much about the Agency's military paranormal research. The case resulted in researchers such as Mark Pilkington and Greg Bishop showing interest over the years.

Einhorn died of reportedly natural causes in a Pennsylvania prison in 2020. For those wondering, he was called the Unicorn Killer because "Einhorn" apparently translates to "unicorn" in German.

So a few months ago some friends were discussing the case and I offered to submit a FOIA request to the FBI. The Bureau responded in May with 356 pages of records.

However, the response indicated the Bureau was simply providing records which were previously offered in response to other requesters:

This means a thorough search was not actually conducted, but the request was filled by providing the material already offered in response to the same or similar requests. As once pointed out by John Greenewald, an effective means of having an additional search conducted is to promptly respond with a request for all records not included in the release.

I realize this sounds crazy. A FOIA request gets submitted for all records on XYZ, the agency responds, then the requester asks for all the records not included in all the XYZ records. Like, no, really, all the records. But this technique results in additional documents a rather surprising amount of the time. While it is indeed a little crazy, it makes a bit more sense when understood from the perspective the initial response was pretty much nothing more than giving the requester what was already provided to previous requesters.

In this specific instance, FBI notified me July 19 of an additional 4,473 pages of potentially responsive records not included in the initial response to my request:

A large number of additional documents does not always prove to be as interesting as it initially seems. For instance, sometimes 356 pages of XYZ may be stored in a much larger folder containing thousands of pages pertaining to similar cases as XYZ, perhaps from the same era or general topic. Nonetheless, one might indeed prefer to be made aware of such records and browse the material for them self.

The quoted cost of a reproduction of the roughly 4,500 pages is $130 which may be delivered in pdf in nine monthly increments of about 500 pages each. I will probably order the material and post it as I periodically receive it.

In related FOIA news, I received 47 pages of previously released FBI records on George Hunter White in April. White was a Federal Bureau of Narcotics agent who parlayed his career underperformance into becoming a member of the MKULTRA crew. He ran houses of ill repute for the CIA where hookers dosed unsuspecting Johns in the name of national security and science. 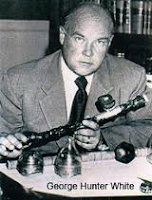 According to John Marks, the overindulging White once had a fender bender in the neighborhood of a CIA-sponsored brothel, resulting in the Agency paying cash for damages to the other driver in an effort to protect the cover of Operation Climax. He reportedly once used a gun to shoot his initials in the ceiling of a New Orleans hotel room. He's also the guy that released hallucinogenic chemicals on a New York subway for the Agency you may have heard about. Real charmer, this guy.

In response to my request for all records not included in the initial response, FBI replied July 20 that additional responsive records were transferred to the National Archives:

I will post from my Twitter account as I learn more about the number of pages involved and as I obtain the files. NARA will advise of the circumstances in response to a request for the material.

As I discussed in WAYWARD SONS: NICAP and the IC, the FBI may offer insights into CIA personnel and activities that are not always accessible through the Agency. Director Hoover had his nose in virtually everything, and FBI files may reflect espionage investigations, background checks for security clearance, and any number of circumstances which provide more material than released by CIA.

Along those lines, readers of WAYWARD SONS will recall the significance of the Office of Policy Coordination, a 1948-1952 front for the CIA and State Department. From the book:

In 1949 the OPC had a total of 302 personnel. By 1952 it had 2,812 with an additional 3,142 overseas contract personnel. The 1949 OPC budget was $4.7 million. Just three years later, in 1952, it was $82 million. By the time of its merge with the Office of Special Operations, OPC activities included worldwide covert missions conducted out of some 47 overseas stations.

The previously cited 1973 CIA intelligence study and its assertion the Clandestine Services stepped up the pace thereafter could certainly be interpreted as significant, if not outright mind boggling. The study references a CIA-composed history of the OPC made up of five volumes, consisting of 722 pages plus three appendices and eleven attachments (To the best of my knowledge, the five-volume OPC history has not yet been released, although a partially redacted version of its introduction is contained in the referenced 1973 CIA Studies in Intelligence).

The OPC originally operated on the watch of Director of Central Intelligence Roscoe Hillenkoetter. Col. Joseph Bryan III was recruited and ran a psy warfare subdivision consisting of such notable characters as E. Howard Hunt. Both Hillenkoetter and Bryan were destined to play influential roles on the board of directors of the National Investigations Committee on Aerial Phenomena.

Curiously, Hillenkoetter's CIA successor, DCI Walter Bedell Smith, expressed interest in the use of the UFO topic as a psy warfare tool. He wanted to know "what use could be made of the UFO phenomenon in connection with US psychological warfare efforts," according to the CIA itself. In 1950, DCI Smith took complete control of the Office of Policy Coordination from the State Department. Surrounding circumstances and the cast of characters are explored at length in WAYWARD SONS.

On July 21 the FBI responded to a 2021 FOIA request on the Office of Policy Coordination. All responsive material was withheld in full:

The cited exemptions involve privacy and security issues. I am in the process of appealing the FBI determination to withhold the material, most, if not all, of which is now over 70 years old.

I recommend those interested in studying the FOIA process (and particularly obtaining related resources) follow Beth Bourdon, a fulltime attorney and parttime FOIA activist. She maintains a Patreon which has proven valuable in furthering my understandings of FOIA appeals as well as related steps of effectively navigating the entire process.